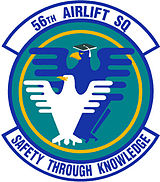 The 56th Air Refueling Squadron was reactivated at Altus Air Force Base in Oklahoma on August 31st.

The 56th will take on the role as the Boeing KC-46A Pegasus training unit under the auspices of the Air Force's Air Education and Training Command.

The unit expects to begin training aircrew for the KC-46A later this year with the first tankers due to arrive at Altus in 2017. The first active duty KC-46As will be base at McConnell Air Force Base in Kansas.