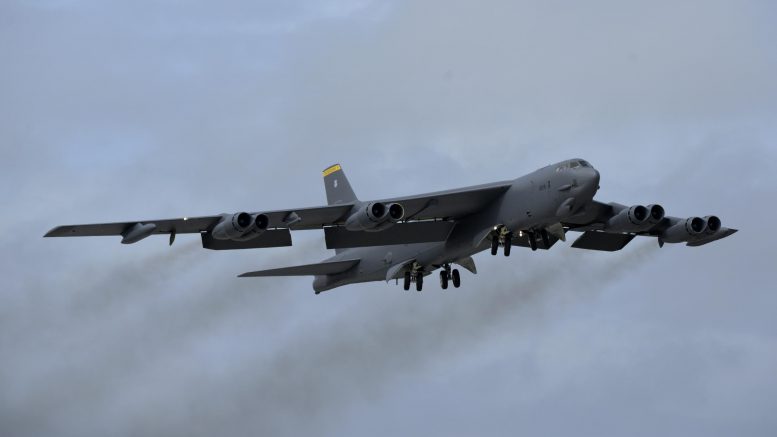 Whilst deployed to Guam the B-52s worked with B-1Bs already at Andersen to conduct fifteen sorties near Australia and the South China Sea as past of the Strategic Command's bomber assurance and deterrence mission. The B-52s also took part in Exercise Phoenix Black in conjunction with the Australian military. "These strategic bomber missions, especially when integrated, provide unparalleled training opportunities for our forces to work together in a joint environment, strengthening our capabilities and ensuring our ability to prepare for contingencies and rapidly respond to crises," said Brig. Gen. Dirk D. Smith, Pacific Air Forces Director of Air and Cyberspace Operations. "This deployment also allowed for greater collaboration between the U.S. and Australia, where we exercised and improved our combined combat capabilities."

“U.S. forces conduct routine training operations within the international air and maritime passages in the South China Sea,” said Maj. Ryan Simpson, Pacific Air Forces bomber operations chief. “Our joint and Pacific partners recognize the importance this area serves as the global commons which connects the Pacific and Indian Oceans. These operations create unique opportunities for our partners in the Pacific to integrate with a joint force of bombers, tankers and other assets within the theater.”

“This operation showcased the U.S. Air Force’s unparalleled combat capability and precision,” said Capt. Chandler Anderson, 34th Bomb Squadron assistant flight commander and airborne mission commander. “From a B-1 pilot’s perspective, we mission planned simulated standoff weapons, were the overall airborne mission lead, and coordinated with all the other assets using only a rapidly deployable expeditionary communication suite planning environment on the flightline, thousands of miles away from our counterparts. We truly validated the B-1s ability to operate outside of Andersen AFB. Our participation, along with the B-52s, F-15Cs, RC-135, and USS Mustin, enabled us to practice tactics in the South China Sea that offered many valuable lessons learned that will make us even more lethal in combat.”