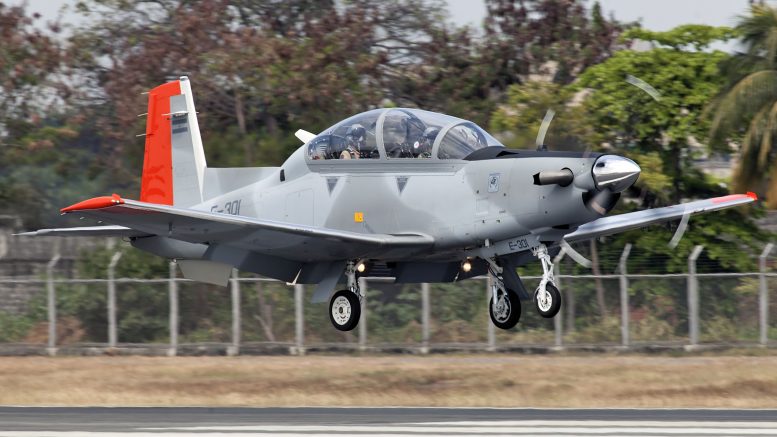 T-6C+ E-301 landing at Guayaquil on Friday 29 with an Argentine Air Force pilot on the front and a Beechcraft pilot on the back seat (photo: Santiago Chavarría/AeroMundo Magazine).

Argentina’s Air Force took delivery of their first four Beechcraft T-6C+ Texan II in the last week of September and ferried them through the Americas for onward allocation to the Military Aviation School (EAM) in Córdoba.

Purchased from Beech’s defence unit, the four Texans are the first instalment in a twelve-aircraft deal valued at about US $300 million by a United States Defense Security Cooperation Agency media release published in August 2016. According to Argentine media, these first four aircraft are valued at US $ 88.2 million and their acquisition had to work through a series of payment delays and troubled binational relations amidst rumours that it could be cancelled due to an impending dispute over Argentine biodiesel exports to the United States.

The aircraft have been serialled starting at E-300, with the first example being noted wearing Textron test registration N2811B for quality assurance, pre-delivery and crew training flights from Wichita.

Using call signs FAG037 through FAG040 (although the later was replaced by Beech’s own BECT127 for some United States legs), aircraft departed Wichita on Wednesday 27 September, staged through Minatitlan (Mexico), Tegucigalpa (Honduras) and Balboa (Panamá) on Thursday 28, Cali (Colombia) and Guayaquil (Ecuador) on Friday 29 and Chiclayo and Lima (both Perú) on Saturday 30. For the first time in about five decades, Argentine military aircraft staged through the former Howard AFB in Panama’s Canal Zone while on their ferry from the United States to Argentina.

Next day, the formation flew-on towards Tacna (Perú) and then Salta, touching down on Argentine soil for the first time at about 7 pm (local time). The four aircraft completed the final leg to Córdoba on Monday 2 October. A welcome ceremony was held with Minister of Defence Oscar Aguad and Air Force Chief of Staff, general brigadier Enrique Amreim presiding. The first two Argentine T-6C+ at the manufacturer’s plant in Wichita (Kansas). In addition to the two-tone grey scheme and dayglo details, both aircraft wear EAM’s Technical Group’s, rather than Air Group’s, badge (photo: Beechcraft via Argentine Air Force)