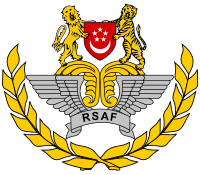 IHS Jane's is reporting that the second F-15SG squadron based in Singapore has been stood up in March. During a formation flight on March 12th one aircraft was noted wearing the marks of 142 Squadron, which last operated as a A-4 unit until disbandment in 2005. It is also reported that aircrew were seen wearing 142 Squadron patches during the recent Exercise Cope Tiger.

142 Squadron will joingn 149 Squadron as the two F-15SG units based in Singapore. The 428th Fighter Squadron also operates the F-15SG from Mountain Home Air Force Base in Idaho. The Republic of Singapore Air Force has been somewhat cagey about the exact number of F-15SGs in service. 32 aircraft have been confirmed but it is likely that there are at least further 8 operating based on US civil allocations for the aircraft.

Jane's also reported that the last F-5S Tiger IIs have recently been retired.