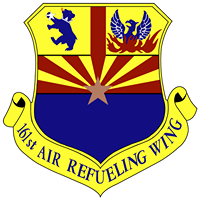 The Arizona Air National Guard's 197th Air Refueling Squadron has a new name for their home base.