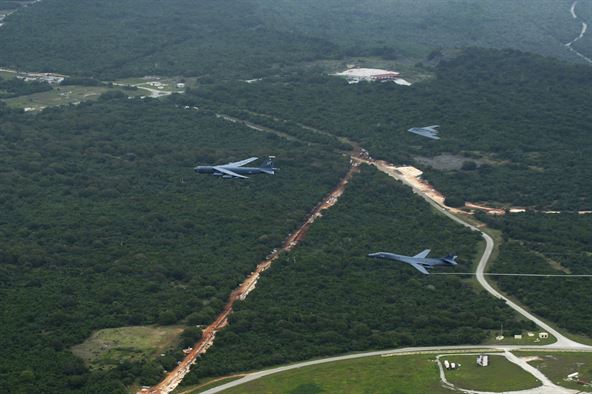 The skies above Andersen Air Force Base in Guam saw an historic sight on August 17th when all three of the United States Air Force's strategic bombers took the sky for an integrated bomber mission.

This was the first time that all three types had flown together from Guam and after a flypast they departed on operations over the South China Sea and northeast Asia. A U.S. Air Force B-52 Stratofortress, B-1 Lancer and B-2 Spirit taxi in preparation for an integrated bomber mission at Andersen Air Force Base, Guam, Aug.17, 2016. This mission marks the first time in history that all three of Air Force Global Strike Command's strategic bomber aircraft are simultaneously conducting integrated operations in the U.S. Pacific Command area of operations. As of Aug. 15, the B-1 Lancer will be temporarily deployed to Guam in support of U.S. Pacific Command's Continuous Bomber Presence mission. (U.S. Air Force photo by Senior Airman Joshua Smoot)