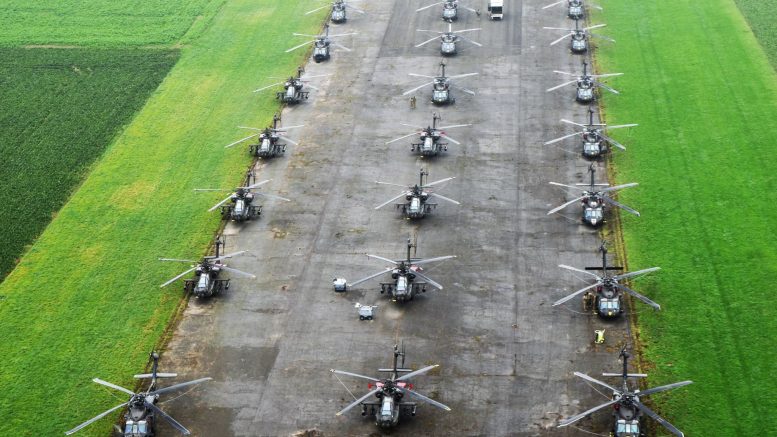 On October 20, 2017 seventy seven United States Army helicopters from 227 Aviation Regiment arrived at Zeebrugge Port in Belgium. They are the first part of an overall eighty nine helicopter deployment to Europe for the next nine months as part of "Atlantic Resolve". From Zeebrugge, the helicopters flew this weekend to Chièvres Air Base, before moving to their operational locations across Europe in the coming days. The total deployment will be made up of x8 UH-60Ls, x15 HH-60Ms, x12 CH-47Fs, x30 UH-60Ms and x24 AH-64Es. The majority of the aircraft will be based at Ilesheim and Ansbach in Germany with small numbers of UH-60Ms and AH-64E will based at Lielvarde in Latvia, Mihail Kogainiceanu in Romania and Powidz in Poland.

The helicopters on the ground at Chièvres Air Base

The unit will replace the 10th Combat Aviation Brigade, which has been in Europe for nine months as part of the continuing deterrence mission. The 10th CAB will return home to Fort Drum, New York, once the transition between the two units is complete in November.

A full report on the deployment will appear in November edition of @MAR.

Video of the helicopters leaving Zeebrugge for Chievres Air Base