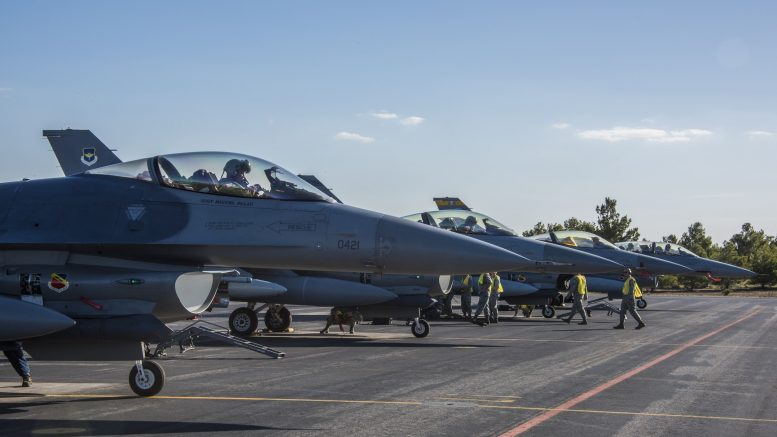 U.S. Airmen from Hill Air Force Base, Utah, prepare to “put a jet to bed” April 21, 2017, at Albacete Air Base, Spain, after flying more than seven hours from the U.S. to participate in the Tactical Leadership Programme. (U.S. Air Force photo/Senior Airman Justin Fuchs)

Eight US Air Force F-16s from the 388th Fighter Wing from Hill AFB, Utah have deployed to Albacete Air Base in Spain to take part in the NATO Tactical Leadership Programme which will run until May 19. The aircraft arrived in Spain on April 21, 2017.

The deployment is planned to be the final time that Hill based F-16s will deploy to Europe as the wing is currently in the process of transitioning to the F-35A.

“This is the last time the F-16 will deploy with the Hill designator ‘HL’ painted on its tail,” said Col. Michael Miles, 388th Maintenance Group commander. “We are extremely proud of the job we have done with the F-16 and we must do our best here at TLP to preserve the memory of the aircraft that is so dear to our hearts.”